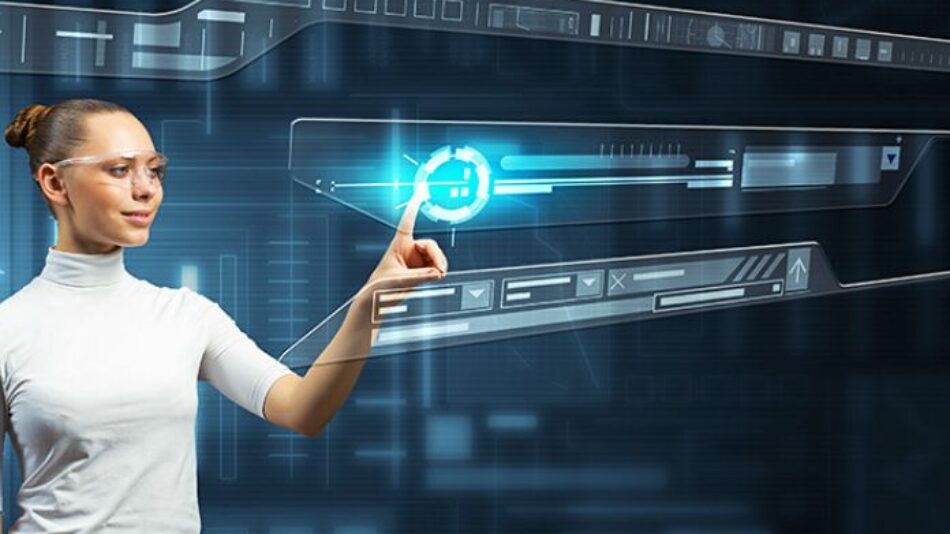 The application of augmented Reality is quickly becoming part of our daily life. Smart glasses, Magic mirrors and immersive experiences are no longer projects for the future but tools that can improve the present.

What Is Augmented Reality?

The acronym AR (Augmented Reality) is known more commonly as an immersive technology capable of enriching the sensory experience through technological tools. In other words, it allows you to blend real and virtual elements, improving the perception of the Reality that surrounds us. It is a real “sixth sense” that optimizes the sensory experience by combining it with the digital one. Artificial Intelligence, Machine Learning and Hi-Tech devices create more in-depth immersive experiences, able to go beyond the classic Reality perceived with the five senses.

Here is a practical example: A customer is in a clothing store and would like to try on clothes. Through augmented Reality, he will not have to go to the dressing room, queue, or waste time changing. He will have to go in front of a specific mirror that uses AR technology to check the fit of any garment. In this case, AR can give life to a real shop of the future, designed to enhance and speed up the customer experience. This is augmented Reality: technological tools and artificial intelligence to enrich and improve the perception of Reality. AR is not to be confused with virtual or Virtual Reality ( VR ).

What Is The Difference Between Augmented Vs. Virtual Reality?

Unlike smart glasses and unique mirrors … augmented Reality also uses much more common tools, such as smartphones, tablets or wearable devices. Let’s find out how this technology was born, how it works, the fields of use and why it can represent an essential opportunity for the working world.

The Origins Of Augmented Reality

Before becoming the public domain, augmented Reality was used in specific fields such as military and medicine. The term Augmented Reality was coined in 1990 by Thomas Caudell, a researcher of the Boeing Company, an international leader in the aerospace sector. The term was first used about a particular display used by workers to roll out aircraft power lines faster. The first applications of this technology are certainly HUDs (Head-up-Displays), or rather instruments integrated into military aircraft to show the pilot more precise data about the surrounding environment: distance from other aircraft, inclination, etc.

Augmented Reality only became public in 2009 with Layar software. This program is integrated with mobile devices with GPS and cameras (to be precise with the iPhone 3GS) to enrich the surrounding Reality. In fact, for example, by framing a point of the city with the smartphone camera, Layar can show icons of nearby restaurants, bars, cinemas or shops. It was a short step from Layar to the well-known Google glass and all the other current AR tools: today, augmented Reality is part of our daily life.

How does augmented Reality work? What devices are you using?

One of the tools most commonly associated with augmented Reality is technological eyewear. Google’s X Lab team designed the first Smart Glasses and launched them in 2014. These glasses are real wearable computers equipped with high-definition cameras and displays positioned above the right eye. Through this display, it is possible to see an enriched reality in which virtual elements overlap the real ones.

These glasses have failed to take off in the typical consumer market but are mainly used in the workplace. Especially for those who carry out precision work, they are excellent for carefully looking at every detail without taking your eyes off the work done. Several Google competitors have been: Microsoft with its HoloLens and Sony with SmartEyeGlass. The first was designed in collaboration with NASA and can reproduce genuine holograms, closer to virtual Reality than to augmented Reality; the latter, on the other hand, is a more innovative product with a more linear design, similar in performance to Google lenses and perfect to be connected with Wi-Fi or Bluetooth to the smartphone.

Currently, AR is no longer only used in smart glasses. It is also in smartphones, tablets, wearable devices, or tools for everyday use. No unique augmented reality apps are needed to use them: get a phone with a camera, GPS locator, gyroscope and accelerometer. Thanks to AR, the smartphone display will be filled with additional information and animated content perfectly contextualized within the surrounding environment. Just think of all the additional information that can be found through this technology: by framing a street, we will be able to know where bars and restaurants are and view user reviews and menus, or by photographing a monument, we will be able to know its origin, the builder and the epoch.

The smart mirror is one of the latest augmented reality innovations and is undoubtedly an original idea for retail and in-store commerce. In fact, through a high-definition camera and the use of Artificial Intelligence systems, this mirror will allow you to try on clothes without wearing them, to test make-up without trying it or even to experiment with hair color without regretting it. The AR mirror is a fundamental novelty for shopping at the point of sale: it could speed up the purchasing process by improving the customer experience.

Augmented Reality For Companies: Use In Business

Augmented Reality represents a new frontier of earning potential, especially for the business world. Let’s find out what are the possible fields of use of enriched Reality for companies :

The world of in-store shopping could draw numerous improvements from augmented Reality. This immersive technology allows you to optimize both the purchase and pre-purchase phases. It is well known: the customer, before completing a purchase, wants to know everything there is to know about that particular product. Augmented Reality can provide additional information about objects and services by using the smartphone and the camera. No more paper labels and doubts: size, materials and directions for use can be viewed with the AR.

The customer will be tempted to buy using this technology: think of experiential and interactive videos in 3D in which the product will be shown from all points of view. Furthermore, as already explained above, the Retail sector could successfully use this technology: AR mirrors improve and speed up the shopping experience by meeting customer needs. Choosing furniture for the home could prove to be much easier when it comes to furnishings. AR allows you to position furniture virtually in your home and chooses them consciously and quickly.

Augmented Reality can be an essential ally for corporate training. Just think of the assistance the trainer must generally give newcomers during work. Using this technology, all the instructions necessary for the excellent performance of the work could be given by mobile devices without the need to employ human resources. In this way, even less experienced workers can carry out the work without ever diverting attention from what they are doing, visualizing – step by step – the correct procedure to complete the assigned task.

The medical sector is also most involved in the augmented reality revolution. AR technologies are already widely used during precision surgery to further support the doctor’s work. AR can also improve diagnoses, trying to visualize health problems in a more in-depth and enriched way thanks to digital tools. Another useful application of Augmented Reality in this area concerns the specialized schools of medicine and surgery. Using RA, doctors who are still inexperienced can experiment and test themselves without the fear of making irreparable mistakes.

Augmented Reality has already brought essential developments in the automotive sector. The most well-known companies in the sector are already working to implement AR screens and displays to provide real-time information about travel. Everything that we can know today using the smartphone will be a plus already inserted in the car in 3D: we will know how much traffic there is, which are the most critical junctions, which route should be taken and what time the arrival time is expected.

Tourism is one of the sectors that – right from the start – has positively exploited the potential of augmented Reality, continuing to improve and study new techniques to intrigue visitors. Many archaeological sites or museums already use AR technologies to improve the experience of those who visit them. It is easy to imagine how a tourist desires to know as much information and curiosity as possible about where he is for the first time. Augmented Reality, using mobile devices with GPS and cameras, can perform the function of a real tour guide. It will be enough to frame the monument in question to know its time, the builder, and all its curiosities.